In 2019 I wrote a blog about the definition of pain, specifically about its classification as that of sensation or perception. It was quite the sensation (you see what I did there, right?), but why it created a splash was not quite what I’d expected.

So, I thought I’d follow up and see if some of the questions I, and others, asked and the issues that were highlighted might, this time, be considered for their content.

Yes, that was a bit of a dig. Despite the blog being posted and shared in groups whose mandate is the exploration and understanding of pain, some within those within the groups expressed boredom with the topic, and others questioned its relevance as a necessary subject for discussion. What was steadfastly avoided was the content itself, which I find fascinating for a host of reasons, but one that is alarming. I was left wondering why, in self-described science-based groups there was both veiled and outright hostility to the challenge of entertaining a particular and fundamental stance on pain?

The reaction to my blog left me wondering whether a Facebook pain science “guru culture” that makes verboten any challenges to its dogma is on its way to being established. More recent conversations have me to hope that eventually, we’ll get around to interrogating that idea too.

If Not THIS then THAT

Though I wrote the blog about the two pertinent definitions of pain, this was not an either/or situation. Well, in a way it was, but being one doesn’t cancel out the other. Pain as sensation, doesn’t mean that perception no longer has relevance. And according to the definitions used (I am getting to that), sensation is necessary for perception. These constructs are intertwined with each other. Yet many reactions to my blog made it seem as though the consideration of pain as sensation can only exist in a biomedical vacuum.

Now for those of you who know me, you know I’ve crossed at least one giant-arsed chasm from biomedical, structural, and magical thinking to critical, skeptical, evidence-based reasoning. It’s highly unlikely I’m ever going to go back the way I came. So, if I’m not going back, then I consider myself to be going forward.

Going forward means establishing working definitions of one construct, in order to know where the other fits, and how they are both used for devising treatments of people who have pain. Doesn’t it?

Pain: Whose Definition is it Anyway?

In my blog I used the definitions of sensation and perception to arrive at my stance that pain (the word we learn to associate with unpleasant sensations) should be understood as a sensation. These definitions were provided to me through a couple of psychology sites [1]https://courses.lumenlearning.com/wmopen-psychology/chapter/outcome-sensation-and-perception/; https://allpsych.com/psychology101/sensation/; https://allpsych.com/psychology101/perception/… and yet, apparently I’d come to the wrong conclusion on how they should be used in relation to pain, though how and why this might be so was not fully illuminated. So I decided to shine a light on my own explanations and try to recalibrate them.

Sensation: The Definition I Used

When sensory information is detected by a sensory receptor, sensation has occurred.

On initial reading, it appears that the requirement for sensation is only the processes of detection and transduction, which doesn’t require consciousness and isn’t technically an experience. The sticking point is the “processing” by the CNS that takes place at the levels of the spinal cord and brain, which would imply some sort of end or conclusion to the process. But let us for a minute stick with the definition of sensation as only the physiological processes of detection and transduction, in which case a person would never be aware of sensation until it is perceived.

Which Brings Us to the Definition of Perception

The definition I used was clear that perception requires consciousness, and that it also requires sensation.

But perception requires so much more than just one physiological substrate (sensation). It includes emotion, and memory, and expectation, and learning. Perception is meaning-making, highly individual, higher-order meaning-making.

Bottom-up processing might be otherwise known as feeling a sensation. For example:

Does pain as perception amount to sensation (detection, transduction) + one or both types of higher-level organization of the signals being transduced, in a conscious person? Otherwise explained as:

This brings us to the IASP Definition of Pain 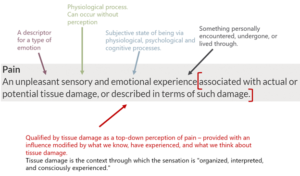 Though nowhere in the IASP definition[2]https://www.iasp-pain.org/Education/Content.aspx?ItemNumber=1698#Pain is perception stated as part of the definition of pain, it can be seen to be implied by the qualification of how it is (always?) described, and/or by its coupling with an unpleasant emotion.

So, if the construct of pain as perception is applied to this definition, and if a person says “ouch, pain”, then at least one of the two types of perception has occurred. In this case, it is sensation (detection, transduction). Would the appropriate way to state this fact be that the person “perceived a sensation of pain”? In other words, the person is aware of the activation of the nociceptive apparatus that resulted in an unpleasant feeling they have learned to associate with pain?

But what about the second part of perception? And this is, I think, where things get very sticky. The second part of perception is neither static, nor measurable. It is influenced not just by what has been learned, but also by what is being learned, and what is being assigned to memory. The only thing that can be determined about this aspect of perception is that sensation is a required substrate – so there is an awareness of a sensation somewhere in the body that we have learned to associate with the descriptor, pain. What the human does with that awareness, where and how they contextualize it with further meaning is individual, variable, and modifiable.

We’ve all seen how meaning can change some aspect of a persons’ pain. But, what aspect is changed? Can it modify the awareness of the activation of the sensory apparatus? There are inhibitory and facilitatory factors, but wouldn’t they be outside of awareness until the (bottom-up) perception of the sensation?  What if nociceptive activation is due to an active inflammatory arthritis or an auto-immune condition? A top-down perception can modify how someone feels about that sensation, but how much and to what functional extent? Are there other things that can also modify either the activated sensory apparatus and or the contextual meaning a sensation is given by the person at the time or on an ongoing basis?

I was chatting with a clinical psychologist mate of mine the other day who said, essentially, yes, perception is a modifier of pain, but it is not the only modifier. Studies on meditation also show modifications to a person’s subjective experience of pain and meditation doesn’t change perception (the meaning of the pain), it changes heart-rate and breathing and other physiological functions.

What then are the ethical implications for establishing MSK treatment protocols based on the assumption of pain as perception? What are the ethical implications of establishing a biopsychosocial model of pain? What part of the higher-order meaning-making that a person attributes to the perception of the sensation of pain do we target in that BPS model of pain and why?

In other words, what judgements do MSK therapists have to make of the meaning a person has made of their pain (beyond being aware of it) to develop a treatment that will modify that meaning for the therapeutic benefit of the person in pain?

The NOI group has attempted at least one such judgment with their qualification of nociception as danger detection, and the idea that pain is an output of the brain when it has decided that there is enough evidence of danger to take action.[3]https://www.ncbi.nlm.nih.gov/pmc/articles/PMC6417868/ The idea then is to gather information on those aspects of the person’s life that might constitute both danger and safety and try to then understand and change them in order to change the pain.[4]http://www.protectometer.com/

But what other judgments might we start to make of the meaning a person has given to their pain? For instance, if a person says they have knee pain and their father had knee pain and had a knee replacement that went really badly and they don’t want the same thing to happen to them, do we weigh that toward a) the perception of their intensity of pain, b) as a barrier to recovery c) as a motivator to recovery d) as a cognitive or affective yellow flag, or e) other? Can we make that a target concept for intervention, and if so, how and why?

A bigger question might be – what position does the MSK therapist take when making a determination that a person’s perception is skewed toward creating pain and then engaging a treatment protocol that includes specific education to change that perception? Does that bring us back into the realm of the operator even as we think of ourselves as interactors?[5]https://www.ncbi.nlm.nih.gov/pmc/articles/PMC3172949/ What if we put that protocol in place and nothing changes? Is it our fault or theirs?

Why Definitions Matter for the Clinician Treating a Person in Pain

Undoubtedly there will be more comments along the lines of how this debate is nothing more than semantics, as though that’s a bad thing. Semantics concern the meaning and logic of language, so yes this is absolutely about semantics and it’s incredibly important that this debate, or whatever you want to call it, is conducted.

Establishing pain as perception (and everything that entails) or sensation (the experience of which can be modified by perception) matters a great deal. Even more so when MSK therapists use those constructs upon which to base treatment or model protocols.

To be fair, I’m not beating this horse for fun. I’ve come from the place of believing pain to be perception, to be in part, created by the meaning someone makes of it. I found myself applying pre-established judgments to a person’s perception of their pain and catering my ‘pain education’ for their condition accordingly. It was, ultimately, both unsatisfactory for the person with pain, and for me as a therapist. I liken it to the osteopathic act of palpation with endless possibilities that all constitute a privileged position external to the person in front of me.

Laura Rathbone van Meurs said “In the beginning, we tried to ‘fix’ pain through the use of manual therapies – to somehow affect the sensation of pain – then we went all brainy and now we are doing exactly the same but with education and psychology. Instead of saying pain sensation, we say pain perception. We don’t have much evidence supporting and (sic) sustained change in levels of pain for these approaches. So, have we made the same error but with fancy new words?” Facebook, November 21, 2019.

The short answer is yes. We’re still trying to fix someone else’s pain, just in a different way.

MSK therapists, psychologists, and physicians are the boots on the ground. We’re at the frontline of working with people in pain. The nail is something that could change how we do that. In this case, it’s become an example of pain as perception, pain that was experienced only due to the context. Yet if we interrogate and pull at the threads of the brief medical report there is very little possibility that the incident occurred without sensation, most likely from activation of the nociceptive apparatus.[6]https://www.ncbi.nlm.nih.gov/pmc/articles/PMC5471339/

Our interrogation of every concept and construct and definition is an absolute responsibility, especially if we use it to support clinical reasoning for the treatment of people in pain.