Every time the optometrist changes the lens on the phoropter they ask that question. Sometimes it’s very hard to tell and it seems there is no discernible difference in visual perception. But eventually the correct lenses are revealed, and a not insignificant amount of money is spent on glasses in order to correct, in my case, myopia, hyperopia  and an astigmatism.

Finding as pragmatic a way to test the perception of the sense we make of the world we do see, even if it seems we see it clearly, is not so easy.

There are several defining conceptual papers, articles and points of view that contributed to altering the lens through which I view the world, but an early one was Diane Jacobs‘  article What is the operator model? What is the interactor model?

“Manual therapy resorted to objectification and reification of treatment ideas the whole way along. Our fore bearers spotted patterns of behaviour or dysfunction in patients and assigned names to them. … Common manual therapy examples are:

Here was someone who, so matter-of-factly, was dismissing me and the way of thinking within my professions as outdated and even worse, possibly damaging. It was uncomfortable to read and impossible to ignore. There were words I didn’t know, like reification.

Finding Fault Where None Exists

There is an oft-quoted saying by A.T. Still  – ““To find health should be the object of the doctor. Anyone can find disease.”[1]1. 2012 Stark, J. JAOA Quoting A.T. Still With Rigor: An Historical and Academic Review Yet the *discovery* of the osteopathic lesion – a catch-all term for any dysfunction that can be found and named ONLY by an osteopathic practitioner is a blatant contradiction to this sentiment and has turned out to be a very fuzzy lens.

Though somatic dysfunction is the preferred term, I’m using the term osteopathic lesion because it was ubiquitous in my Canadian education. Seriously, there was a lesion for pretty much everything. In any case, neither term has a definition that is amenable to gathering an evidence base comprehensive enough to provide support, and there is much debate that the concepts, as they stand, are entirely scientifically unsupportable.[2]Fryer, G. (2016) Somatic dysfunction: An osteopathic conundrum, IJOM

In practice, I doubt that there is any patient who has attended for osteopathic treatment and been turned away for presenting the very thing we should be looking for: health. Instead, the osteopathic lesion ensures that we will find something and that something will be significant; a rotated liver, torsioned intestines, side-bent or sheared vertebrae, and misaligned cranial bones to name just a few of the vast number of possibilities available.

When attribution of symptoms, especially pain, cannot be explained as having a definitive medical cause and are attributed to an osteopathic lesion or a series of lesions, the operator goes above and even beyond the biomedical model of treatment and, instead of shrugging shoulders or thoughtlessly suggesting the symptoms are psychosomatic, leaps to provide the patient with a problem, or problems, they don’t actually have.

Osteopaths should be appalled that the practice that has emerged from osteopathic philosophy is actually just an extension of the biomedical model of illness convoluted by perceived, rather than actual, dysfunction. This may be a controversial viewpoint that is usually dismissed rather than discussed, nevertheless, I contend it is exactly that. When we, as osteopathic practitioners attribute to our patients a definitive ‘lesion’ that no matter how we describe it is not demonstrably or objectively measurable, or even scientifically supportable, then we are arguably doing more harm than good, EVEN if pain symptoms resolve after treatment.

If pain symptoms resolve and the patient subjectively feels better and objectively moves better, this outcome in no way justifies the perception of the presence of an osteopathic lesion or somatic dysfunction, or changes the harm we might be inflicting by diagnosing and conveying those dysfunctions to the patient.

All Kinds of Awesome

But that is what I used to do, and it led me to believe that not only was I incredibly skilled, but I was also just plain awesome. If everyone could just get some osteopathic treatment the inevitable conclusion would be … world peace. At the same time, I dismissed the nagging discomfort that I could never be sure I was right.  The lesional actions or effects were so expansive and could be changed so easily depending on the situation that when in doubt all I had to do to better support the circumstances was … change them.

Patient outcome might still be the same despite the number of lesions I perceived or treated during any given session, but those patient outcomes were the good ones and they took up a vast amount of space in a cognitive bias loop that helped me stay awesome for a little while longer in the face of mounting contradictory evidence.

Outside the cognitive bias loop were the patient outcomes that were not changed by my awesomeness: the people who experienced pain after treatment and who continued to experience pain despite the number of lesions I treated, and who eventually took their pain away – slightly poorer for experience, probably more frustrated and possibly with a more fragile concept of themselves – to try someone else.

Turn And Face the Strain …

Perhaps that is why the cognitive dissonance of reading alternate perspectives and sometimes downright withering critique was not so much a disquiet to avoid, but an uncomfortable curiosity to be assuaged. It wasn’t just what was being said about osteopathy and massage therapy that got my attention, it was why. Why was the discourse in Soma Simple so unnerving? Why is the Facebook group Skeptical Massage Therapists so compelling and popular? Why are groups of manual therapists coming together to question their profession?[3]PMMT&MLRG, PSiO, DNM, BPSfP, EPS to name a few  Why do doctors and other medical professionals feel the need to band together against complimentary alternative medicine? 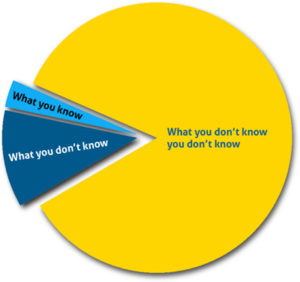 Part of what I didn’t know was much about neuroscience and that knowing more about it was going to considerably change the way I saw things.

“Neuroscience is showing us that our patients’ brains are producing effects that project out to the body and forward to the patients’ conscious awareness. The manual therapy acts as a catalyst toward that, but no more.”[4]What is the operator model? What is the interactor model? – https://docs.google.com/document/d/1ruRBlTM-7eJq2EbJCsdfrRf3Pgg0SsShvKIkEoyKP-c/edit?hl=en&pli=1

It is not easy to shift a paradigm from the usual and popular way of thinking about or doing something to a comparatively new therapeutic model. It is challenging, confronting and, at any point in time, varying degrees of complete.

“The attitude of the practitioner toward the consequent movement, and it might be quite a large and powerful one, should be quiet acceptance and interest, not unlike the attitude adopted by a counselor once they’ve created an environment conducive to authentic verbal expression.”

Barrett is imploring the practitioner to step back, observe and be interested but not to interfere. The practitioner’s role is done and it was both a large one, and a minute part of the process the patient is experiencing.

But, in order for the manual practitioner to truly step out of the way to facilitate rather than control patient experience, they would first have to change the lens through which they see the world. An operator does not step back, but sees their input as integral to the patient experience, and even that the “good” experience the patient has could never have occurred or continued without them. An operator sees themselves as awesome.

Though we manual therapists don’t like to consider ourselves reductionist thinkers, our continued emergence through the biomedical and biomechanical lens gives little room for anything else. We can repeat over and over that we treat the whole person, that we treat holistically, that we take into account what the mainstream MD does not, but we are really just an extended version of the same paradigm. We may have personally blurred the edges, but certainly not yet extended ourselves beyond them on either an educational or institutional scale.

At its most simplistic the biomedical model works best where a linear cause/effect can be determined. In manual and physical therapy where symptoms of pain are a primary reason patients seek treatment, perceiving a cause of pain based almost entirely on anatomy, biomechanics, physiology and a smattering of neurology is no longer an acceptable practice. It’s time to change.

Incorporating a biopsychosocial perspective into manual practice and learning pain science and neuroscience will make that change happen, though I cannot guarantee a smooth or angst-free transition. Not just a change in thought, though that’s usually where it starts, but a change in practice as well.