“Remember, best block, no be there.”- Mr. Miyagi

I’ve had some interesting exchanges on the internet lately that revolve around critical thinking, or at least a facet of it. They were essentially fights; parry and thrust that had no reason, no clarity and no resolution. But they got me thinking about what it really means to be a skilled critical thinker.

In essence thinking critically is a practice, but more than that it’s a state of mind, even a state of being. It’s an egotistical exercise, but one where the ego is dissected and compartmentalized so it no longer drives thinking as only a means to an end.

It’s the ego, and by extension examined bias that moves out of the way in an argument that can be examined as it passes by, and then countered without impediment.

But critical thinking is not an innate skill. One does not simply think critically, because human nature doesn’t work that way. Critical thinking is hard work, and all the harder because before you begin, you have to realize there’s a problem that you’re not thinking critically about.

Do We Have a Problem Here? 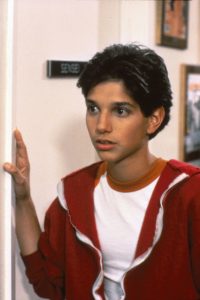 Several, large problems actually. At first Daniel thinks he can resolve the problem by integrating himself within it. That’s reasonable. Human’s tend toward the easiest resolution first, and if Daniel wasn’t a tiny stick figure in comparison to the Cobra’s that might have worked, but he wasn’t quite the right fit. He knew it. They knew it.

First attempts at critical thinking can be like being smacked in the face with a cognitive dissonance fist.

The threat is real, or at least it feels real. Someone says something that challenges your beliefs about yourself or your life; or asks a question you don’t have a good answer to. Any pseudo life-threatening challenge can be avoided temporarily, but it’s probably not going away any time soon. That sort of menace needs dealing with one way or another.

Wax on, wax off. Side to side. Up and down. Little, repetitive, endlessly tedious movements that focus attention to details for an unforeseeable outcome. But these are base skills that need building on. 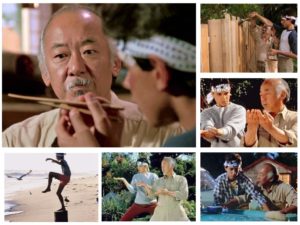 Core skills in critical thinking are the capacity for analysis, evaluation and inference. These are applied to an argument and its conclusion. They overlap in a self-referential sort of way and include the ability to seek and query evidence in relation to the premise of an argument and its conclusion. These are the foundational skills and there are steps to follow to implement them and identify the many assumptions an argument may hold.[1]Dwyer CP, Hogan MJ, Stewart I. An integrated critical thinking framework for the 21st century. Think Ski Creat. 2014 Jun;12:43–52.

These are good skills to have, but they are not the only skills necessary.

Critical thinking also requires intellectual values and standards that have nothing to do with the content, premise, proposition, inference or conclusion of an argument. They have to do with our capacity and limits for self-reflection and self-correction.

The Metacognition of Mr. Miyagi

Thinking about our own thinking is how we achieve the intellectual values and traits that take us from unskilled thinking to skilled thinking. Our knowledge of the minutia of argument may make us good at having an argument, but it doesn’t make us critical thinkers. For that we need more intangible qualities, like courage, empathy, integrity and humility, perseverance, autonomy and confidence in reason.[2]Intellectual Standards | Critical Thinking. Available from: https://www.criticalthinking.org/store/products/intellectual-standards/338

Unskilled thinkers share traits with pseudoscientific thinking. They tend toward generalizing and stereotyping, can be arrogant and paranoid and believe any question put to them is a personal attack. Seeing in black and white terms, they often think and act like children. When drawn to celebrity and power, sound bites become legitimate arguments.

“No such thing as bad student, only bad teacher. Teacher say, student do.” – Mr. Miyagi

The manipulator. They have a great control of language and rhetoric and know the ways of critical thought to get what they want. Sometimes that’s influence over other’s belief or behaviour, sometimes it’s to appear knowledgeable or powerful. They don’t want to be a critical thinker because that would require the intellectual traits like humility and courage they don’t have. They don’t want integrity, but they want you to think they have it.

A skilled thinker struggles with their own ego and commits to intellectual and ethical development. They genuinely want to provide council, not ridicule, even with disagreement or impatience. Skilled thinkers can recognize the manipulator, and strive to enable others to see when they are being manipulated. Though they may ask critical questions, they do not use critical thinking for attack.[3]Ethical Reasoning | Critical Thinking. Available from: https://www.criticalthinking.org/store/products/ethical-reasoning/169; The Miniature Guide to Critical Thinking Concepts & Tools, 7th … Continue reading

The skilled thinker is a small population of people, but I’m pretty sure that Mr. Miyagi was one of them.

“Never put passion in front of principle, even if you win, you’ll lose” – Mr. Miyagi

Passion and the emotion that come are antithetical to critical thinking and easy to see in argument; but they are not anti-human. Even the skilled thinker cannot take their ego out of the way for everything. When they can’t they use that opportunity to reflect on their thinking and to assess why they didn’t display the kind of reflective judgement that should have been there.

For the rest of us passion is often what drives our thinking and our engagement with others. When that happens there is no winner. We can try and score points off each other with witty, wordy repartee and fallacy hunting.[4]Fallacies: The Art of Mental Trickery | Critical Thinking Available from: https://www.criticalthinking.org/store/products/fallacies-the-art-of-mental-trickery/159 Or accuse one another of not thinking, or thinking wrong, or saying the wrong thing the wrong way so everyone’s defense mechanisms come up; but even if we win, we lose.

Daniel’s opponent swept his leg to exploit a weakness, and when we do the same in an argument then we slip to the level of unreflective thinker and can no longer even see what thought is. We lose those intangibles; the integrity, the humility, the empathy and, in the end we lose the respect of self, and others. But it doesn’t have to stay lost. When Daniel’s opponent lost the fight, he regained his integrity by recognizing why he lost, and that it had nothing to do with Daniel.

In the end we lose a combative argument because we have made what should be a reflective conversation into a fight. We live in a world of expressed thoughts, not a competition. If someone confronts us with their thoughts, they are not our enemy. If we think of the places that facilitate conversation, debate and argument as a dojo then we can think of ourselves as in training. The goal is to sharpen our own skills, not annihilate the other person. 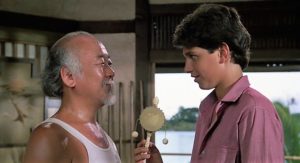 Daniel: This is the secret of your family’s karate?

Mr. Miyagi: Practice, you will.