In 2014 Torsten Liem, DO, wrote an article that detailed several challenges from neuroscience and psychology to the accuracy and reliability of osteopathic palpation. These normal cognitive influences include pareidolia, confirmation bias, perceptual bias, cognitive ease, and inattentional blindness. [1. Liem, T. (2014) Pitfalls and challenges involved in the process of perception and interpretation of palpatory findings. International Journal of Osteopathic Medicine (2014)17, 243 -249.]

Palpation itself, both osteopathic and other, has been studied almost to death. There is a multitude of experimental research that exists on the subject, but none of the studies have been able to demonstrate reliability for either inter- and/or intra-rater measurements and if there were any, I would cite them. In fact, as evidence goes, the amount of insignificant studies available could be collated to show that palpation is not in any sense a reliable tool of the trade.

In 1963 Dr. Viola Frymann asked what was at the time more of a rhetorical question; “What then, is this art of palpation, the most important and most indispensable (my emphasis) tool of our trade?” [2. Frymann, V. (1963). Palpation part 1: Its study in the workshop. Academy of Applied Osteopathy 1963 Yearbook of Selected Osteopathic Papers, 16-21.]  The emphasis on art implies creativity, difference and an indefinable quality. This quality that makes us other than the norm is a perception that endures today. In Canada a representative association for osteopathic practitioners explains osteopathy for the public this way; “Osteopathic Manual Practitioners identify, assess, and treat the body’s structures and rhythms using a gentle, hands-on approach. This fundamental technique is called osteopathic palpation. Manual practitioners spend many years developing the very sensitive sense of touch they need to master osteopathic palpation. Osteopathic palpation is what makes osteopathy different from other forms of therapy (my emphasis).” [1. Ontario Association of Osteopathic Manual Practitioners]

This perception represents the current foundational training of palpation in traditional osteopathy here in Canada, which is to be able to feel motion from the body of the patient that is so minute there is no other way of measuring it except by the hand. [5. McConnell, C.P. (2000). A glimpse of Dr. Still’s art. Journal of the American Osteopathic Association. 100, 392-394.] [6. Liem, T. (2009). Cranial osteopathy: A practical textbook. Seattle, WA: Eastland Press, Inc.] [7. Barral, J.P. & Mercier, P. (2005). Visceral manipulation (Revised edition). Seattle: Eastland Press.]  This motion is called the Primary Respiratory Mechanism (PRM), an idea put forward by William Garner Sutherland DO (1873-1954) in the early 1900‘s stemming from his observations of a disarticulated skull and an impression that the articulations are “Beveled… like the gills of a fish… indicating articular mobility… for a respiratory mechanism.”[8. http://www.cranialacademy.com/cranial.html]

In theory PRM can be detected by palpation in all living tissues. Educational institutions and professional organizations emphasize this ability “… the Osteopathic Manual Practitioner relies on his refined sense of palpation. Using this sense there is no tissue that is out of the reach of a skilled and experienced Osteopathic Manual Practitioner’s sensory abilities.” [1. The Canadian College of Osteopathy]; “… their skill lies in their highly trained sense of touch, which enables their hands to diagnose and treat the underlying causes of pain.” [1. Osteopathic European Academic Network] Depending on the tissue, this motion follows a specific pattern and a regular rate. In osteopathic parlance the rhythmic frequency of this PRM motion is called motility and can only be detected by the precise palpation of a skilled osteopathic practitioner.

In reality, there is no scientific consensus for the existence of an inherent respiratory motion as it is described. The osteopathic research related to PRM mechanism is sparse, not consistent, collectively does not validate the existence of this motion and cannot be used as evidence that this motion exists. [9. Moskalenko Y.E., Frymann, V., Weinstein, G.B., Semernya, V.N, Kravchenko, T.I., Markovets, S.P., et al., (2001). Slow rhythmic oscillations within the human cranium: Phenomenology, origin, and informational significance. Human Physiolog,y 27(2) 171-178] [10.  Moskalenko, Y.E., Kravchenko, T.I., Vainshtein, G.B., Halvorson, P., Feilding, A., Mandara, A. et al. (2009). Slow-wave oscillations in the craniosacral space: A hemoliquorodynamic concept of origination. Neuroscience and Behavioral Physiology 39(12), 377-381] [11. Nelson, K.E., Sergueef, N. & Glonek, T. (2006). Recording the rate of the cranial rhythmic impulse. Journal of the American Osteopathic Association 106 (6) 337- 341.] Within the osteopathic community there is debate about existence of the PRM itself, and of those who do believe its existence there is debate about the rhythm, rate and mechanism of the movement. [12. Sommerfeld, P., Kaider A. & Klein, P. (2004). Inter- and intraexaminer reliability in palpation of the “primary respiratory mechanism” within the “cranial concept”. Manual Therapy, 9, 22-29.]

In his article Liem acknowledges the poor showing of palpatory reliability findings, but it is the osteopathic evidence of his proposal “that palpatory perception and its interpretation may be subject to additional multiple conditioned experiences and influences, such as habitual and context-related influences, as well as cultural and social imprinting,” that is lacking almost entirely and requires literature from neuroscience and psychology to contextualize the pitfalls he is describing.

Liem gently concludes that ‘Knowing about the pitfalls and sub-conscious processes, becoming aware of them and dealing with them consciously may result in more adequate palpation procedures and enhance competence in palpation practice.” This is nice way of not directly criticizing the current practices and espoused abilities of perception claimed of osteopathic palpation. That criticism, though necessary is not so easy to manage when discussing osteopathic palpation with osteopathic practitioners because, as is often and irrationally argued, you must do it to understand it.

John Upledger is a DO famous within the profession for his branding of CranioSacral therapy, a modality he developed and named so that it could be taught to non-osteopathically trained practitioners.[1. https://www.craniosacraltherapy.org/History_06.htm] When describing osteopathic palpation Upledger states that; “You must learn to shut off your conscious, critical mind while you palpate for subtle changes in the body you are examining. … 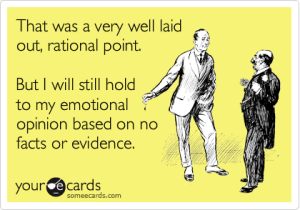 Apart from the concept that critical thinking and scientific enquiry are antithetical to palpatory perception, there are a couple of quite significant issues at play here.

The pitfalls that Liem details come from neuroscience and psychology. They are known, normal cognitive behaviours and profoundly impact the notion of absolute precision and absolutely correct perception in diagnosing and treating through osteopathic palpation. The influences Liem includes in his article (reiterated below) have a variety of sobering consequence for how students learn and how practitioners use their palpatory understanding:

One could just as readily conclude from Liem’s article that the current practice of osteopathic palpation may be more of a complex system of pareidolia and reification. This conclusion is the other end of the spectrum, but belief in absolutely perfect perception that ignores normal neurological and psychological cognitive processes is no less extreme than saying we are just making it all up as we go along.

Though Liem doesn’t offer an idea of what more adequate palpation procedures and enhanced competence in palpation practice might look like, any change in this direction must start with letting go of the perception that our hands are somehow separate from the normal processes of our mind and body and have skills so profound they can reliably detect microns of motion that might not even be there.

If we consider even ONE of these normal cognitive influences as a variable within an experimental palpation study it would have to be a confounding variable that could never be controlled for, and would always render the results either questionable or void. In my opinion, it means there will never be a study capable of showing palpatory reliability either within or between practitioners. We should now stop wasting time and money on trying to prove the existence of a reliability that cannot exist and move on to incorporating those aspects of science that could actually helps us establish a reasonable physiological explanation of the treatment outcomes achieved related to touch.

In 1999 Caroline Stone wrote in her book Science in the Art of Osteopathy “As knowledge and understanding grow, so do interpretations and validations. It is only right that concepts should be allowed to develop. Consequently, much of what osteopaths used to say about these mechanisms is no longer correct, and no doubt much of what is here will be superseded as understanding continues. However, it is incumbent on any profession to make strenuous efforts to rationalize what might underpin its practice – it is a part of professional maturation and allows much more effective interprofessional communication as a consequence, through trying to describe philosophies in terms that are recognizable to others.”[15. Stone, C (1999) – Science in the Art of Osteopathy. Nelson Thornes Ltd. UK] If we apply this to palpation, and incorporate what is known in science, we can begin to accept that much of what osteopaths say about the mechanisms of palpation and interpretation are incorrect and have been superseded primarily by neuroscience, psychology and pain science. We currently have undeniable growth in knowledge and understanding, and it is incumbent upon our profession to make strenuous efforts to change and grow according to that new understanding.

That new understanding should absolutely include the somatosensory and cutaneous sensory systems so prevalent and necessary in palpation perception for both the therapist and the patient. These areas of study are largely absent from osteopathic training, which is a hard position to understand or defend given that palpation, the art of touch, is the cornerstone of our profession.

Traditional manual osteopathy is on the brink of change and it is the very sense of touch that osteopaths possess that can be better understood and enhanced by embracing and incorporating this knowledge. We can either continue our traditions and hope (against hope) that one day research will be able to measure individual perceptions and provide the evidence we need to justify them, or we could acknowledge and embrace what is widely known about the neuroscience of touch and the biopsychosocial aspects of treating patients in pain.

As a more current understanding of human neurophysiology and neurocognitive processes overtakes the inquisitive, inventive, creative but ultimately incomplete or incorrect hypothesis of our forebears’, change will have to mean that tradition will become what we pay homage to, not what we adhere to.