If you haven’t already guessed, osteopathic palpation is sort of my thing.

I did a palpation thesis, twice. Both times as part of osteopathic study. Neither study was published, though the bigger of the two was approved by the IJOM for publication if I could just fix the tiny problem with the statistics. And by tiny I mean somewhat insurmountable.

My thesis partner and I built a hydrodynamic model. I really wanted that word in there. Hydrodynamic. Great word. The model was made up of a constructed silicone bladder attached to a syringe pump, filled with water and run by a computer.  It was a closed system designed to increase and decrease the volume of water in the bladder so that participants in the study could feel or not feel volume changes at the surface. I nicknamed the model MONARK – a mash of my name and my thesis partner’s name. 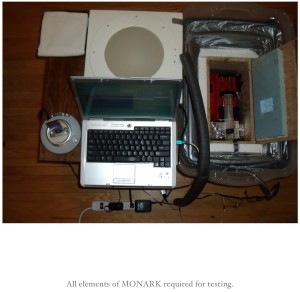 Our goal was to test the osteopathic palpation ability claims related to assessment and treatment of minute – in the range of microns minute – rhythms of the body that apparently manifest themselves almost everywhere at a relatively rhythmic rate known as the primary respiratory mechanism (PRM) [1]Liem, T. (2009). Cranial osteopathy: A practical textbook. Seattle, WA: Eastland Press, Inc.. 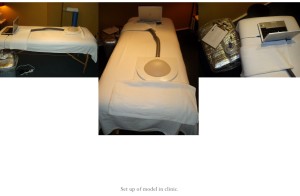 Theoretically, the movement of the MONARK could only be only generally extended to the PRM phenomenon because it expressed minute and differing volume changes at a particular rate. Ultimately inconclusive measurement attempts of the MONARK suggested this movement was in the range of microns for even the largest volume change variable. 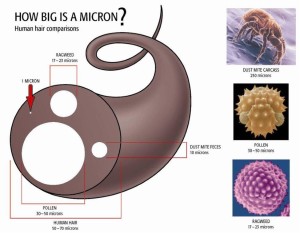 Even if unsuccessful, at least measurement attempts could be made on the model using a variety of tools, including the X-Box game system. Baseline measurement of the rate and extent of the small, often described as micron level small [2]Liem, T. (2009). Cranial osteopathy: A practical textbook. Seattle, WA: Eastland Press, Inc.; Paoletti, S. (2006). The fasciae: Anatomy, dysfunction & treatment. Seattle: Eastland Press, Inc. motions that have been hypothesized to emanate from the human body do not exist.

My literature review was 38 pages long, included at least 25 palpation studies of various types and concluded that palpation reliability for pretty much any subjective palpation assessment, whether on human or model was unable to be established.

I did at the time what most osteopathic manual practitioners still do when faced with evidence they don’t want to consider, I came to the conclusion that the ‘right’ study hadn’t been done yet. By finding ‘fatal’ flaws in all of the studies, including mine, I was able to dismiss these studies one by one as relevant to the osteopathic palpation skills I knew were lurking there, but for which science had not come up with sensitive enough ways of measuring.

This is a very convenient way of doing things in order to maintain the belief that as an osteopathically trained practitioner I had what could only be described as seriously fine palpation skills. I needed these skills and they were integral to my identity. By ignoring what could, through a different lens, be evidence that seriously fine palpation skills are really not a universal trait no matter what my training, I could avoid the unpleasant sensation of cognitive dissonance and achieve a sort of cognitive consistency. For a little while.

No research topic I can think of in manual therapy has been repeated as many times and in as many different ways as palpation reliability. Yet despite this plethora of studies many, probably a majority, in the osteopathic community interpret the research as I did – as though no positive result is actually the same as no result, or as if the research had not been done at all. In other words the many studies have not disproven the hypothesis that palpation reliability exists and, therefore, there is an absence of evidence that is not evidence of absence.

In reality, there are so many palpation reliability studies, including some that are ‘good enough’ to be included in systematic reviews that the ‘fatal’ flaw argument is not a reasonable one. The call for more research in palpation studies is a constant one but at some point, there also has to be a conclusion drawn on the research already done. 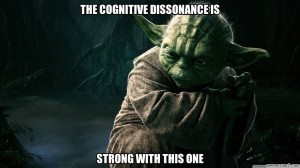 The cognitive dissonance is strong if your profession stakes its reputation and a significant basis for existing on being able to reliably feel movements that cannot be reliably felt.

But is it really about what we feel, or is it about the stories we tell ourselves and each other?

The rumblings from the medical and scientific community are not necessarily about palpation specifically, but about the larger health-related claims that stem from an ego-driven sense of self and profession. And those rumblings are getting louder, ruder and more dismissive of those palpation driven beliefs. There is less and less disengaging of the scientific community from CAM profession claims and more and more head-on challenge.

As it stands the manual osteopathic community is unable to meet the burden of proof required to make such heady palpation claims and by extension the healthcare claims shaped from them.

But what does it actually, realistically, practically mean to accept that the palpation skills you assumed to be infinitely precise and true in their diagnostic and treatment abilities for the benefit of patient health are not anywhere as magical as they seem?

The answer to that question might depend on how invested you are in doing the mental gymnastics required to get around the feelings created by dissonance. If that’s possible, and for some it might not be, then it means having different stories to tell.

Interpretation of an idea, observation or feeling requires context but being unaware of that context enables only one way of explaining the outcome. Being able to entertain more than one idea at once is itself a form of awareness practice, but being aware that there are many ideas that can exist parallel to one another is the first step.

For instance, a patient comes to see an osteopathic manual therapist who has only rudimentary knowledge of psychology and neuroscience. The primary complaint is low back pain that has no known mechanism of injury and for which there are no findings on either MRI or x-ray. The patient receives assessment and treatment according to whatever protocol the therapist has been trained to apply. The patient leaves the treatment session with no perception of back pain. The therapist is asked to provide an explanation for what happened and does so by revealing their interpretation of what they felt under their hands – a temporal bone in external rotation, a compacted SBS, a sacrum with little to no vitality that is in torsion, an internally rotated small intestine – then describes their treatment and normalization of the lesioned structures. The therapist believes that along with pain relief, the patient has also undergone anatomical and physiological changes that in turn liberate “an area of the body, whose release then provides a cascading effect of other releases throughout the body.”

Unknown to both patient and therapist their interaction is observed by a psychologist who knows nothing of osteopathic therapy. She observes the patient is lying down comfortably and appears relaxed, the room is dim and quiet. She observes the therapist first talk to and then touch the patient in various places; the head, the abdomen, the pelvis. The patient appears to be relaxed by the touch. At the head, the abdomen and the pelvis the touch is slow and sustained and gentle. Other motions applied to the patient are rhythmic and oscillatory. The psychologist offers a possible explanation of the outcome with relation to the psychosocial interpretation of belief, touch and caring that the patient is receiving.

Unknown to both patient and therapist their interaction is observed by a neuroscientist who knows nothing of osteopathic therapy. The neuroscientist offers a possible explanation of the outcome with relation to the patient’s neurological sensors in skin, muscle and joints that are activated by touch and motion and provide a sensory stimulation to the brain that may help to down-regulate the prior neurological input that may have resulted in the perception of pain.

You have an osteopathic explanation that relies on improbable levels of palpation interpretation without being able to establish reliability even with a not-insignificant amount of research, versus explanations that are science-based. Though these explanations may not have specific manual research studies behind them, they are supported by known science that can help to explain how neurophysiological or psychosocial factors may play a part in decreasing pain perception related to touch and context.

These less wrong explanations do not make osteopathic treatment or outcome cease to exist, but they do insist it start to tell a different story, one that makes it more modest, more honest and more flexible.

There are many ways to reduce the uncomfortable feelings of dissonance, but there is really only one permanent way.

“Change the conflicting belief so that it is consistent with other beliefs or behaviors. Changing the conflicting cognition is one of the most effective ways of dealing with dissonance, but it is also one of the most difficult. Particularly in the case of deeply held values and beliefs, change can be exceedingly difficult.”[3]http://psychology.about.com/od/cognitivepsychology/f/dissonance.htm